The local climate’s potentialities from which the Drăgășani vineyard does effectively benefit do allow the vine plants not just to realize within their grapes the respective synthesis processes of whatever among their finally obtained chemical constituents no matter how complex their structures could be but furthermore to achieve them under some quite large quantitative ratios. Yet this genuine natural abundance of climate potentialities is accompanied by no climate roughnesses at all which could concomitantly have caused to the grapes whatever losses and alterations that might subsequently have deteriorated their genuinely established intrinsic constitutive harmony. The statistical data respectively gathered in regard to the fertility degrees, the productive ratio of their offshoots as well as the quantities and qualities of their grapes’harvests for some vine kinds cultivated in the Drăgășani zone which do produce table grapes such as: CoarnãNeagrã, Afuz Ali, Victoria or ChasselasDoré do attest the respective facts that the above mentioned vine kinds do provide outputs which simultaneously are economically profitable and qualitatively the best.  Insofar the production of sultanas could be concerned the statistical indices which have been recorded in the respective cases of the vine kinds of Sultaninã and Cãlina (which is a created hybrid between the kinds of Sultaninã and Braghinã) are attesting the respective achievements of some both quantitatively adequate or either very good harvests and bearing an excellent level of quality. 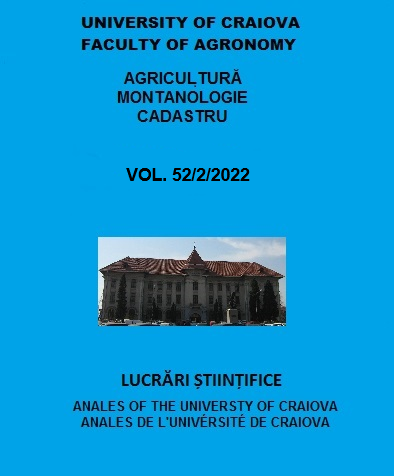