Grain sorghum is a common species in the world also an old culture show since the fifth century BC (Antohe, I., 1991). It is grown on large areas in areas where climatic conditions are unfavorable for corn, with poor soils and nutrients in water supplies, degraded and climatic conditions with high temperatures. This ability to adapt to almost extreme weather conditions makes the species Sorghum bicolor as an alternative to exploit the productive potential of sandy soils in south-western Romania (Draghici I. et al. 1997).
In this paper are presented results obtained from sorghum grain production under the testing of various rotation crops - monoculture, crop rotation of 2 years (cowpea - grain sorghum) and three years (cowpea - rye - grain sorghum) under the influence of various doses of mineral fertilizers with NPK applied in non irrigated conditions.
The results obtained during the testing period showed that the conditions of sandy soils from Tâmbureşti as the best run for grain sorghum was cowpea which conduct to obtain a higher production on sorghum at the variant fertilized with N150P80K80. 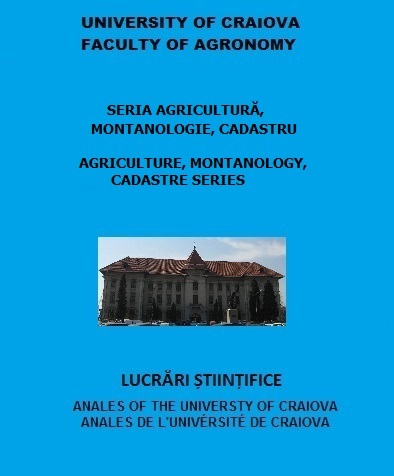 Vol. 41 No. 1 (2011): Annals of the University of Craiova - Agriculture, Montanology, Cadastre Series