The forest is a basic component of the environment, without which human life and not only cannot be conceived, fulfilling the role of its improvement and preservation. The forest is designed to provide a rich range of products with an undisputed economic value to the human. It is not only the woody mass and the other products of the forest, including: game, fish, berries, edible mushrooms, herbs, resin, tanning substances, etc. National forestry Director â€“ Romsilva is a legal person, headquartered in the municipality of Bucharest and operates on economic management and financial autonomy, exercising also public service tasks, with specific forestry and horse Authority accordance with the provisions of the organization and functioning regulation â€“ approved by Government decision. The specific legal basis under which the National Forestry Director-Romsilva operates and is organized, are Law No. 46/2008 (Silvic code) and HG No. 229/2009 on reorganization of the National Forest Registry â€“ Romsilva. National Forestry Director â€“ Romsilva represents a strategic unit at national level through the range of activities it carries out, thanks to its role in the national economy. During the period analyzed (2015-2017) It is noted that the component indicators of the turnover in the natural expression recorded differentiated developments: ascending â€“ The volume of the recovered woody mass and the amount of forest seeds ; Fluctuating â€“ the quantities of berries and truffles and other edible mushrooms, respectively; Descending â€“ Number of forestry and ornamental puffs in forestry nursery. 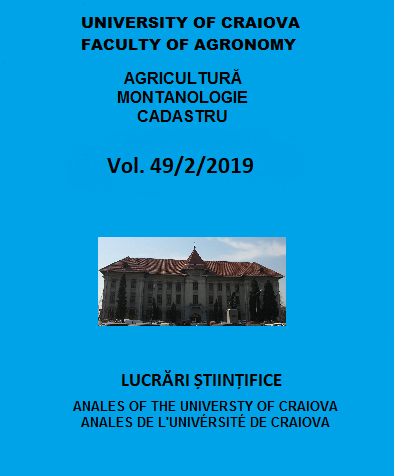 Vol. 49 No. 2 (2019): Annals of the University of Craiova - Agriculture, Montanology, Cadastre Series