The anthropic changes undergone by the forest lands in the Dolj county, to which the current climate changes have added up, have shaped the potential forest vegetation. Anthropic changes of the forest lands through the large-scale works that started in the interwar period by the embankment of the Danube and the Jiu rivers, the building of the dams on the vast surface areas of the Danube meadow, the creation of lakes and ponds and their transformation into cyprinid farms, the building of dams on the Danube and other rivers for water accumulation and their use for power generation, the irrigation of crops and water supply to the population. The development of the irrigation system in the Oltenia Plain on the right bank of the Jiu River and the Sadova-Corabia irrigation system by leveling the vast areas occupied by sand dunes altered the water regime in the soil. All these anthropic improvements have unfortunately been made by the deforestation of vast forest areas, both in the Danube meadow and the mobile sands on the left of the Jiu river. Up to 1990, the complex system of improvements had operated through the combined action of factors involved in the intensive exploitation of the agricultural land. After 1990 the state interventions ceased, the systems were slowly abandoned, the agricultural lands were not intensively cultivated, and the climatic factors impacted heavily on the forest lands and potential forest vegetation. Important changes have occurred in the soil water regime, atmospheric humidity and even the circulation of air masses in the area bordered by the Balkan Mountains and the Oltenia Plain. All of these anthropogenic changes have added to the current and ever more dramatic climate changes in the past decades. Thus the necessity of zoning and microzoning of the potential forest vegetation in the area of the Dolj county emerged. Remedying or even stopping the phenomenon of degradation of stationary factors can be done by the afforestation of these lands and the establishment of protective forest stands. 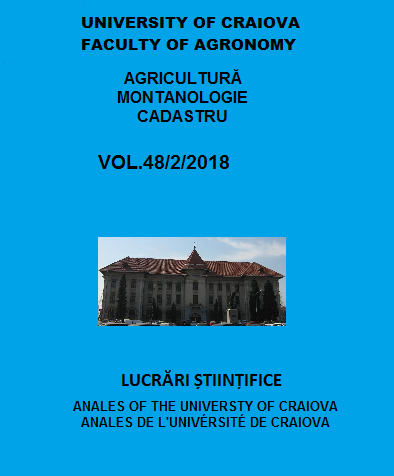