STUDY ON THE DEVELOPMENT, PRODUCTIVITY AND PROFITABILITY OF ARIZONA AND BELLAROSA POTATO VARIETIES

The potato (Solanum tuberosum) is a herbaceous plant that belongs to the nightshade family. They are edible, rich in starch so they are used in human nutrition in various forms, serve as animal feed, but can also be used as a raw material in various industries (Toader and Roman, 2014). Originally from South America, more precisely from the Andes Mountains region, potatoes are the 4th largest source of food energy after corn, rice and wheat

(https://ro.wikipedia.org/wiki/Istoria_cartofului_%C3%AEn_imperiul_inca%C8%99). At maturity, the tubers have a dry matter composed of 70% starch, 2-4% cellulose, 2.5% pectins, 0.5-2% reducing carbohydrates and 0.5-1% sugars (Berindei, 1984). The objective was represented by the study of two potato varieties, namely Arizona (white potato) and Bellarosa (red potato) grown on two different plots analyzing both their productivity and profitability, both being two early varieties. The crops were studied during the entire vegetation period, also following the economic analysis and implicitly the profit of each variety. The first determination was related to planting density, respectively to the number of nests per hectare. All the technological works that were undertaken within the studied plots were noted, the vegetation phases from the moment of execution of each work with the help of the BBCH scale, the consumption of materials, time and fuel that each intervention involved. In the end, we also found out the costs of the works performed in order to be able to establish the profit obtained from the sale of each variety in order to be able to establish which of the two is more profitable. Prior to harvesting, two sets of samples representing 10 potato nests were extracted from the two plots in order to analyze the productivity of each variety. These determinations were performed under laboratory conditions and involved the following: number of tubers / nest, weight of tubers / nest (g), stem height (cm), largest tuber / nest (g), smallest tuber / nest (g), their diameter in section (cm). 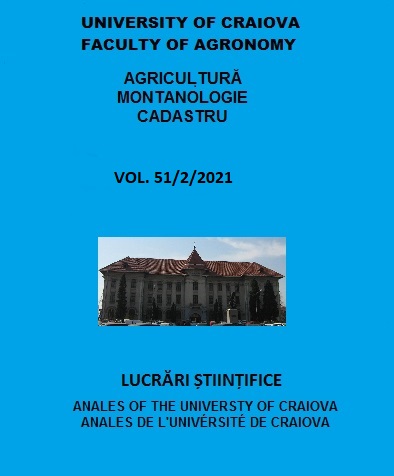 Vol. 51 No. 2 (2021): Annals of the University of Craiova - Agriculture, Montanology, Cadastre Series